Cultural revival, education reform, and study of history – The Island.lk

Cultural revival, education reform, and study of history – The Island.lk

Your email address will not be published. Required fields are marked *

Published
on
By
The Chairman of Litro Gas Lanka, Mr. Thesara Jayasinghe, is certainly a big power – the mighty muscleman in Pohottuva governance. He was brought back as head of Litro less than a day after his removal from the position by Secretary to the Ministry of Finance.
Well, by whom and how did this happen?
It was by none other than the President of Sri Lanka himself – Gotabaya Rajapaksa! 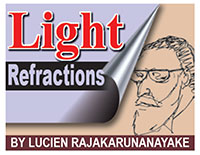 
Published
on
By
By Punya Heendeniya
The era was the mid-sixties. The transitional period of ocean travels to air travels. No hand phones and children read story books and played board games with the adults and sat for dinner together. No phone lines to the rural areas. Electricity was just installed. Roads widened with and given names of the local dignitaries. The only form of communication was by post or by telegrams.
We were invited to a world film festival held in Mexico, and the reason was Gamperaliya, a masterpiece written by the peerless writer Martin Wickremasinghe and transformed into celluloid by Dr. Lester James Peries; it won the Golden Peacock award at the international film festival in New Delhi in 1965. I was the main actress and Henry Jayasena played the male lead in the film.
The invitation was sent to me by Dr. Lester J Peries via a trusted crew member. My father started pacing up and down the sitting room murmuring, “How can we send you to the other side of the world alone? You never even go to the “lindha” (the water well) alone. Send a message saying that you cannot accept this invitation.”
Such was the atmosphere I grew up in. My mother as usual kept “mum”. My elder brother, an ardent admirer of my artistic career, came to my rescue.
In an unusually confident and assertive manner, he told father, “This is a once in a lifetime opportunity for someone like Nangi and she should make use of it. If you do not allow her to participate, I will take a transfer and move out of the house”. That did the trick and my brother’s firm statement had the desired impact on the situation.
Dr. Peries heard about my problem and devised a plan to make things easy for me.
He transferred his invitation to his wife Sumithra, who also was a co-producer and the editor of the Gamperaliya. All is well, that ends well. I managed to join Sumithra and Henry as part of the smallest group of invitees to the festival.
Foreign exchange 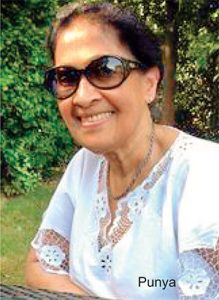 Three of us had to find foreign exchange for the trip even though the air travel was paid for. Only four pounds was allowed per person for foreign travel. We got together and appealed to the then Prime Minister Dudley Senanayake, who very generously allowed each of us to carry one hundred pounds. That was just our pocket money.
Sumithra and I appointed Henry as our delegation leader.
As state guests of the Mexican government, at dinner in Hotel El Cano, in Acapulco, and other banquets, three of us said in Sinhala, that we would have stopped with the sumptuous starter itself if we had to pay for our meals.
A mink coat
It was the height of winter in the Northern Hemisphere. Coming from a tropical country we were short of warm clothes. Sumithra having been in France had a few warm clothes and she very willingly gave me a pair of old gloves and a flannel vest. A very affluent fan of mine, who became one of my best friends later, came to my rescue. She offered me her mink coat.
A mink coat to Punya Heendeniya was manna from heaven those days.
If I had been offered that coat today, I would have turned it down, given the sheer number of innocent minks killed to make that coat.
Eighth Resenna Mundial
That was how the Mexican festival of festivals was named in Spanish. All the award -winning films of the world of the year were invited and the festival was held on a very grand scale in an ancient battlefield. We were able to mingle with the most famous stars of the world. I kept the then Ceylon (Sri Lanka) flag flying by wearing only the osariya and cloth and jacket for two to three weeks. This was highlighted in bold letters in the national newspapers. In an article written by Henry, at a later date, he mentioned, “Punya created history in Acapulco by refusing to wear a swimsuit.” That was my upbringing and Sumithra in her nonchalant, casual, and calm way supported me by saying we did not show flesh to attract attention.
The newspapers were all full of pictures of me in cloth and jacket and osariya.
Meeting the Asian film giant Satyajit Ray
Our delegation comprising just the three of us was assigned a limousine for travel purposes and it was named “Ceilan delegation“
To the adjoining multi-starred hotel to our Hotel El Cano, came a one-man delegation. That was none other than the Satyajith Ray with his Charulatha. His appearance was majestic. He was tall, dark, and handsome. His visit made the three of us feel as if we had a close relationship with him. He very happily refused his limousine and travelled with us until the end of the festival. It was remarkable that he was one of the judges of the panel, at the New Delhi International Film Festival, where Gamperaliya was adjudged the best film. So, he had some understanding about the members of our delegation.
We attended experimental matinee film shows almost daily and one day we gave a lift to an American film critic in our Ceilan vehicle. He was seated with Ray in front and our topic of conversation was Asian films. He talked about Akira Kurosava and Satyajith Ray. All four of us were silent. He said he has seen the Opu trilogy. Ray in his elegant style said, “I am Satyajith Ray”. I do not have words to express the American’s reaction. He was elated.
On the day of the screening of our film, we draped our guide girl Christina Godard in a saree, and she carried it in a real stylish way. I wrote a short speech for myself, and Christina translated it to Spanish. I memorised it and when I addressed the audience in fluent Spanish “Saludos mees Amigos”, the audience went into a rapturous applause. Sumithra in her genteel manner, appointed me to collect the trophy for the film, “The Golden Palanque Head”.
Our sojourn in New York City 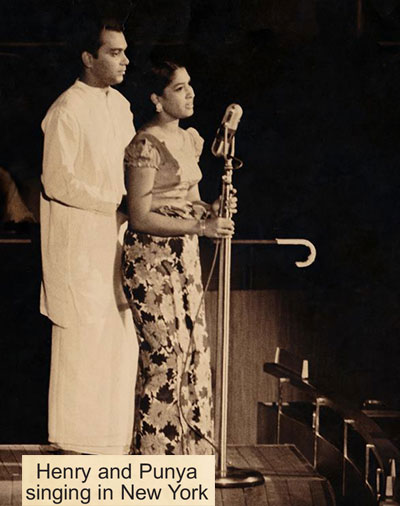 Having left Acapulco city’s warmer climes, our next stopover was New York. The Ceylon Mission of the National Assembly was aware of our arrival. We landed at the snow-covered John F Kennedy airport in the early evening. We were warmly welcomed by the staff members of the Ceylon Mission.
Among them was another tall, dark, and handsome figure I had seen in only pictures but never met. That was none other than our very own Mahagama Sekara. The funny side to it was, he was from Siyane Koralaya and I was from the adjoining Hapitigam Koralaya. We both were gamayas from rural Mirigama and Radavaana. We had to meet for the first time, in the John F Kennedy airport in New York!
From then onwards it was one full impromptu programme with dinners and sing songs. At one point we were singing “Mey Sinhala apage ratai, mulu lova ey ratata yatai” (lyrics by Mahagama Sekara) from the 42nd floor of a sky scraper. After that we all were walking along the Fifth Avenue to our lodgings. Unusual for the time of the year in the winter sky, the moon appeared through the skyscrapers. That was a very familiar sight for all of us and our very own poet Mahagama Sekara murmured, “Gamey andurana kenek dekka vaage”. (As if we have seen someone known to us back from home”)
That time the ambassador to the Ceylon Mission was Mr. R.S.S Gunawardane. He joined most of our get-togethers and invited both Henry and me to perform at the World Human Rights Day, which fell on the 10 December. The scheduled agenda had Sidney Poitier as an invited speaker. Our very own Shantha Weerakoon was to perform a Kandyan dance item. The Ceylon Mission made use of our unexpected presence at the right time to invite us to perform. We most willingly agreed. A separate printout was made available introducing us as the main actors of the award winning Gamperaliya and also mentioned our most recent and fresh participation at the Mexican festival from which we had just returned after winning the Golden Palanque Head Award.
Henry and I discussed what to perform and we sang our own Maestro Amaradava’s ” Piley pedura henata aragena enavaa“. Again lyrics by Mahagama Sekara. This opportunity proved to be a feather in our cap as we would never have dreamt of such a heaven-sent chance like this to perform on the main stage of the UN assembly. Credit to our great Dr.Lester J Peries and Gamperaliya. In a way it was all possible due to my brother’s support as well. I could not imagine getting garlanded on the UN stage in appreciation of the participation.
Meeting legendary Sir Sidney Poitier 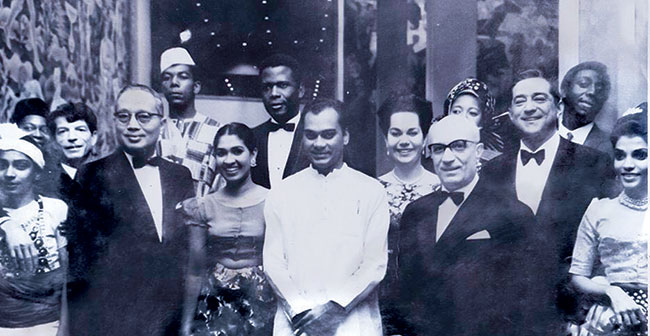 Sir Sidney in his speech to the assembly, very humbly recalled how he had been coached to read and write by a senior Jewish waiter, when he was employed as a child in a menial job as a dish washer. He mentioned that his journey from dust to gold, and to hold the prestigious Oscar, was rough and full of hurdles.
Then followed the photographic session. We lined up and I was hidden a little behind, and suddenly I felt two iron tongs lifting me from my waist and placing me in front saying, “Your place is there” and positioned me next to the Secretary General Mr. U Thant. Immensely flabbergasted, I looked back. I could not believe my eyes; it was none other than Sir Sidney Poitier, the heartthrob of the galaxy of Hollywood stars, and at that time he was at the apogee of his distinguished career.
We enjoyed the Green Room hospitality of the Secretary General. I saw this unassuming Knight in shining armour, mixing with the crowd like a well chiselled, well- polished ebony statue that had come to life.
We as artistes adored this trailblazing, ground-breaking Oscar winner’s performances, in films like “Guess who is coming to dinner”, “To Sir with Love” and “In the heat of the Night”.
Sir Sidney is no more. But he will live in the hearts of everyone.